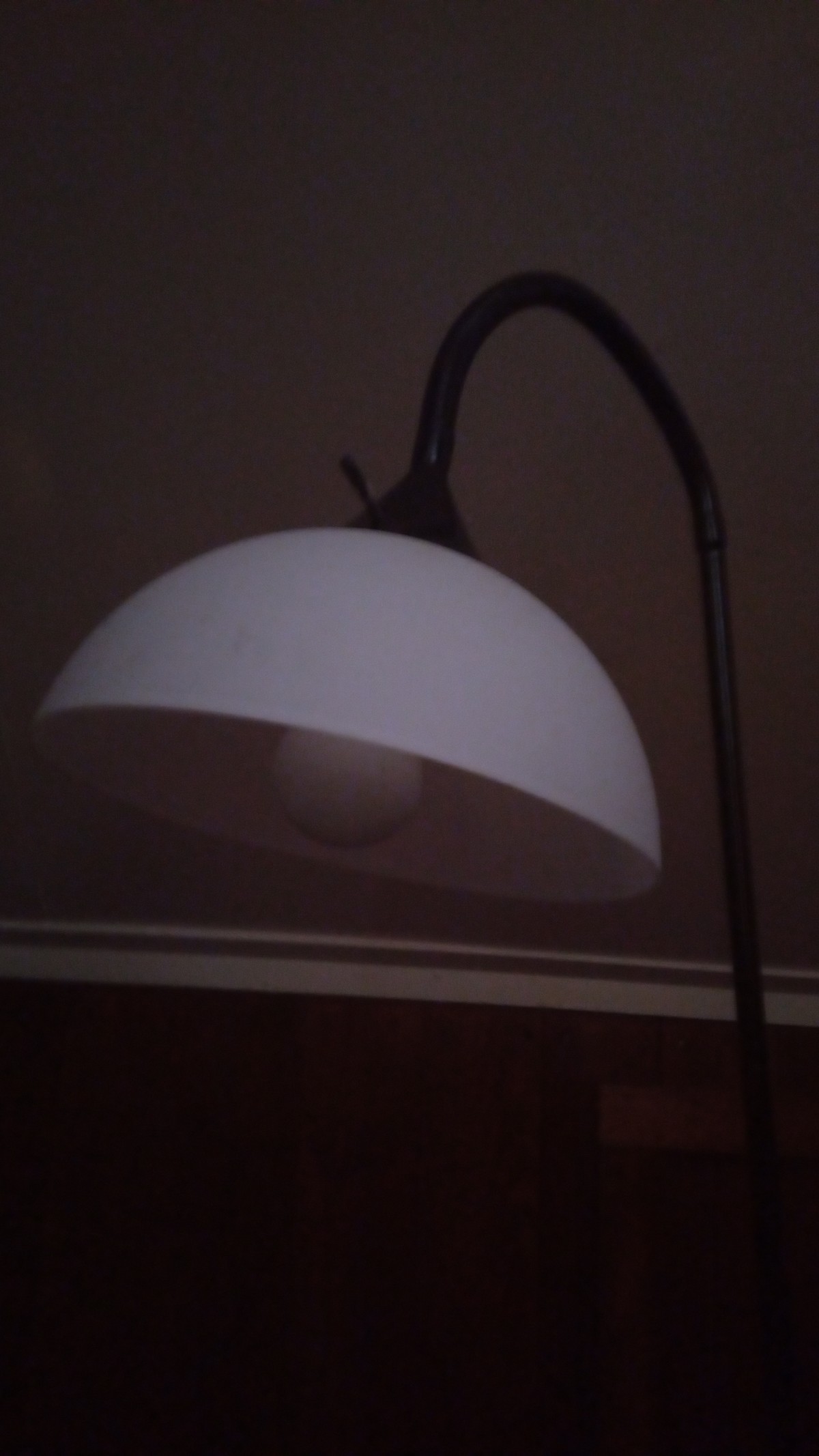 “Wait, did it just get dark in here?” – Terrence Popp

OK, not THAT kind of darkness, but what DO you do when the lights actually go out? Joe Dolio of Tactical-Wisdom.com recently went through this very scenario himself, near Detroit no less, a place you might not wanna be in even when the lights are on. I won’t speak for him: he does a fine job of that himself, and has a lot of good information on the matter of the electricity grid going down and how to prepare for such a scenario; you can read that here and come back: 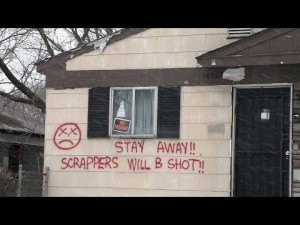 Done? Good: hope you either learned something or even better knew this in advance. If you scrolled down far enough, you may have noticed a comment on this post, where while hanging out after hours on shift I thought up some of the things I have ready to go when faced with the same scenario. Without editing it here it is, and as I re read my own ramblings I’ll try to take notes and correct or add things I may have forgotten:

“It’s funny you put this up as even though I’m pretty prepared in the case of the boog, a lot of my stuff is still in boxes. I’ll say you were still more prepared than most, but this is what I’ve got going for that particular scenario:

As far as lighting goes, I actually have several lamterns: one lead acid powered with a spot lamp, one that’s USB charged, and one with a bug zapper. Aside from miscellaneous hand held lights that are battery powered (which I have several spares) for, most are leds built into power banks. Not exactly the brightest, but how long would it take to run down something built to recharge a decent size phone at least once? And aside from my exceptional night vision there’s good reason they’re not super bright, which I’ll address later. 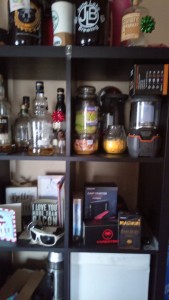 “Spot lamp is being the LED that charges via USB.” 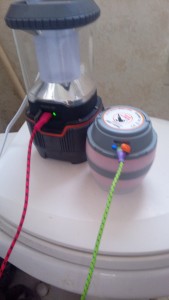 “Actually got the most use out of the bug zapper one.” 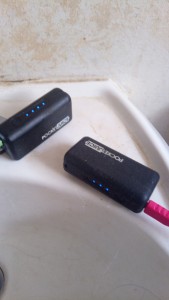 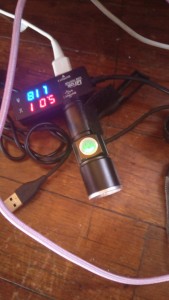 “Bike light, which can be focused. ” 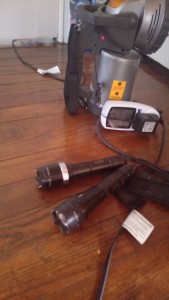 “Did someone say taser flashlight!?”

Power banks, actual dedicated ones? My preferred brand is RavPower, of which I got an upgraded model to replace the first one I got way back in 2013 (still works) with over 16,000 mAh in my EDC bag, and a 3 port one in a bug bag with over 28,000 mAh. To put that in perspective, the smallest car battery (which I run: Optima Yellow D51R!) holds 38Ah, which is 38,000 mAh. I also have a fold up solar panel in the same bag. 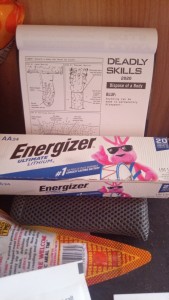 “Decommissioned EDC Bank, somewhere around 15,000 mAh. The light on it would probably last a week straight though I haven’t tested that.” 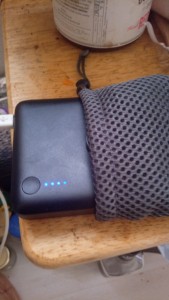 “The “big black bank” wait who turned out the lights?” 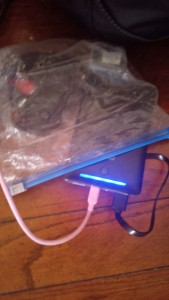 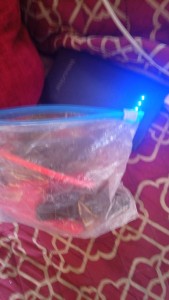 Food & water: the fridge and freezer alone have enough food for just me (I live alone. Keeping it that way) would last at least a few weeks, but I have a lot of various dry provisions on hand. I also have at least 10-15 gallons stashed in various places, and a Sawyer Silver impregnated ceramic filter with a rating of about 30,000 gallons, along with a 5 gallon bucket and other coolers (should probably get another bucket actually, one for each hand. 5gal buckets can be incredibly useful). 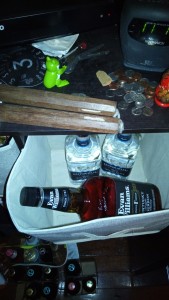 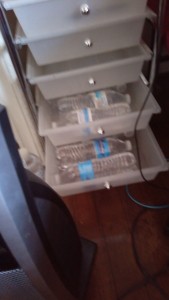 “Bedside bottles. Hey, you never know when you’ll be stuck there due to illness or I jury or sex marathon, ask me how I know!” 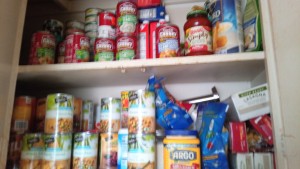 Fun fact: despite the sell by date, it takes forever for canned goods to spoil. Also makes good fillers or starters for random ingredient stews!” 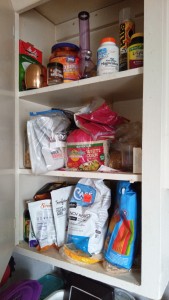 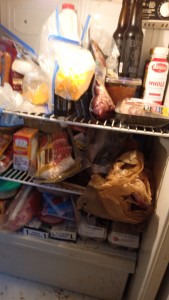 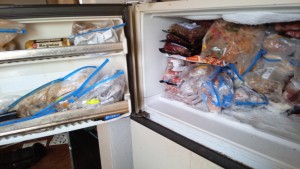 “Probably the first thing to go during a bug in.” 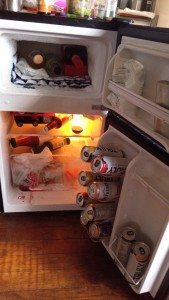 “Did someone say Booze Fridge?” 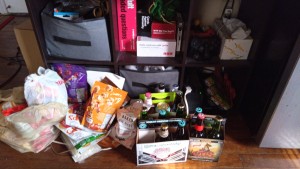 “Also pictured: entertainment that doesn’t require batteries, at least during sunlight hours. More on this later.” 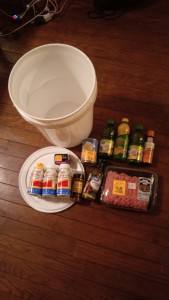 “One use of a bucket. Another:exercise equipment. Just add water!”

Speaking of fridges, I have 2 APCs which provide enough back up power to shut down a computer in case of an outage, but on their own can keep many low power appliances such as radio clocks and routers (communication anyone?) running for quite a while (actually did just that moving stuff to Fort Sky Dungeon, more on that later). Luckily for me, my new fridge which is bit smaller than the old one actually uses half the amp hours as the old one, which was already less than 3 amp hours to begin with, so either APC could keep that going for quite a while. One major advantage I’ll be taking soon enough: all those are are rectifiers given the batteries are 12v. Meaning you can take a decent size marine battery and wire it in, greatly increasing the life span or your well marbled ribeye and tamales from mee maw. Having extra clothes in case it’s winter time helps too, especially if you’re in the unfortunate living arrangement that electric is your sole heat source. And you don’t have a camp stove. Speaking of which: got a 55,000 btu steel one and an adapter for one of those 20gal ones used for larger grilles (I should probably get one soon, just to cook outside at least). I also need to get a good size generator, which would also recharge the batteries. 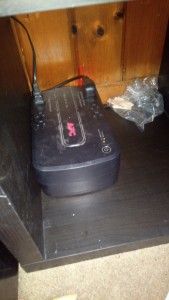 “Picked this one up from the June Lake thrift shop and replaced the battery. Works great!” 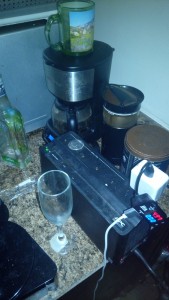 “New one off amazon.”

As far as gas: I drive for a living, with a now 40ish miles to get to my launch spot north of Murder Hornet City. My longest time before refueling is 4 days (most efficient drive train in the business!), and by day 4 the lowest I’m at is around 1/4 indicated (the official capacity is 13.2gal, but I’ve refuelled over 14), which sounds low. However, one of my sotra secrets is I have a stabilised 5gal gas can, which gives me at a minimim an additional 150 miles should I need it. 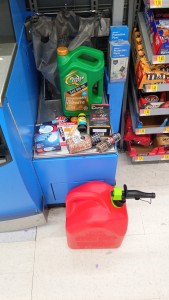 “Funny at least when I got it: these were perfectly in stock.”

Speaking of secrets, I’ve been saying this a lot: the best resources (weapons in particular) are the ones no one else knows about, case in point the couple in St. Louis. That said, in the event of a break in, I have weapons stashed everywhere I might be at that moment. Which is far less likely a scenario now, given I live in a 3rd story attic unit with a reinforced door (cedar I think?) that opens outward: you’d get in faster by cutting through the wall, and chances are I’d hear that. 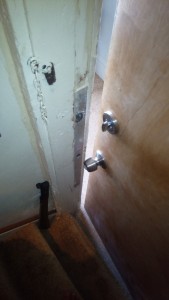 “Good Luck Kicking this door in.”

One final thing as far as secrets: you might wanna hold off on displaying your wealth of preparedness should this be an extended stay in. Reason being is that, though you may be prepared, most others are not. And people in desperate situation tend to look around to see who else’s lights are running and has smoke coming from the windows because you’re burning something on the stove. Running a generator when it’s noisy (if you can muffle it, even better) aside, plan on not operating a lot of lighting, and cover your windows if you can. 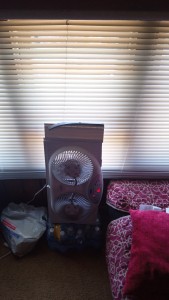 “Current living room view from the inside.” 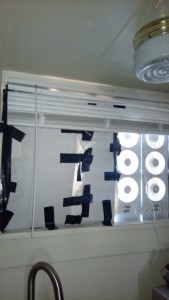 “Kitchen window for now. Plexiglass will be installed later.”

Sure I missed something, but that’s all I got for now. Cheers, Team Let Em Burn!”

So a couple of notes. 1. Probably the most important since it deals with people: get to know your building tenants if you live in an apartment or other kind of arrangement where other households occupy the same building. It’s one thing to have either a connection or crosshairs on households outside your complex: it’s another thing entirely to deal with them inside it as I do. Thankfully in my case we’re all on very good terms and see eye to eye on most things, but for now the lights are still on. 2. Entertainment. In particular the kind that doesn’t need batteries. Maybe you have a Gameboy or Candy Crush on your phone (which we’ll get to in a moment) to keep your mind off the hordes down the street looting for toilet paper. But how about a few books laying around you haven’t read or even magazines (did someone say PunchRiot.com!?)? Kindles are a great thing to have, but if you have the paperbacks even better as they don’t run out of battery power. Also on that list, especially if you have other household members: games. Board, card, Dirty Minds guessing, you name it: those can do wonders in saving everyone from going insane in the long term and even the short.

“This should last me a few months.”

3. Communication. Just yesterday I suspended my old internet account at the old place, which I left up for the old neighbours to use until they could figure something else out. I also scheduled to have fiber put in here (that’s all that’s available) for WiFi. Of note: I now have unlimited data on my main device and there’s a library down the street, so on paper I don’t really need it. But there is something to be said about hard wired connections: last time I went through a power outage the WiFi still worked as long as the router had power and I was still shit posting on instagram. Along that same vein: off the top of my head, the average smartphone burns about 0.5-1 amp hour on average depending on how you use it. In my case I have 2, the smaller of which I would use in this scenario given it burns less power to do many of the same tasks. 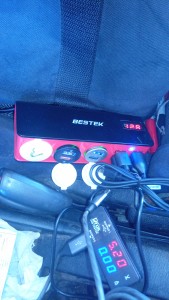 “Having a charging array in the car helps too.”

4. Vehicle provisions. Dolio brought this up before and it bears repeating: have supplies in your car just like you do in your house. Packaged food nonwithstanding if you live in bear country, but extra clothes, first aid supplies, tools, distilled water (serves double duty of coolant cutter for the radiator), weapons, and in my case I carry a full size and donut spare in the trunk. Yes: I’ve had to use both. More than once. Also something that’ll be a project of mine: WiFi booster. Got a filehub from RavPower that on top of being yet another powerbank does just that, could come in handy near a library or other WiFi source that’s a bit out of reach for your devices. Speaking of power, fashioned my own array for just about anything, inverter optional. The same rules apply with these as other supplies do: make them as inconspicuous as possible, especially considering most vehicles tend to have windows easily seen through. Final note: make sure you’re on top of your maintenance, especially if you can do it yourself: do you really wanna rely on AAA if you’re getting out of Dodge? 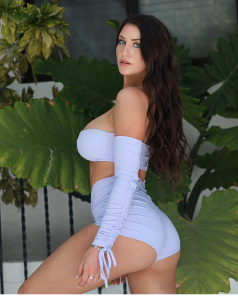 “Don’t count on it unless you look like this.”